How Target’s New Floor Plan Will Divide to Conquer

In response to declining foot traffic, competition from neighboring stores that carry similar products and other financial pressures among brick-and-mortar stores, many retail companies are closing stores to cut costs. In the first quarter of 2017 alone, Radio Shack, Payless and The Limited have each closed hundreds of locations.

While Target’s stock price has struggled with weaker than expected performance (its stock has tumbled over 30% since Black Friday 2016), the company isn’t closing any of its 1,800 stores. Instead, it’s investing in them. Earlier this year, the company announced a $7 billion initiative to improve its business—which includes major in-store changes: “We’ve got to re-imagine that store experience,” CEO Brian Cornell told investors in an earnings call earlier this month. “Today’s millennial shopper doesn’t enjoy shopping one of our tired stores that hasn’t been touched in 10 years.”

As many retailers look to new technologies to spice things up in-store, Target is looking at a more fundamental element to overhaul: its floor plan. The first of these “re-imagined” stores will open outside Houston, Texas in October 2017. The new Target stores will feature two separate store experiences: a move with major implications for the brands Target sells and for the future of the retail industry.

Walking into a Target today, the aisle where you’d find Q-Tips looks the same as the aisle where you’d find shoes. But the shopping style for these items is very different (you’re not going to try on Q-Tips, after all), and Target’s redesign is focused on meeting those needs—so much so that the company is splitting its stores down the middle. A departure from standardized merchandise aisles that have uniform lighting, the new store will have two separate entrances that lead to two distinct shopping experiences. One half will be a “specialty store,” with curved, circular aisles of apparel, home goods and electronics that consumers can browse. Harsh fluorescents will be replaced by LED track lights that focus on giving each department more of a showroom look.

The second half of the store is designed to attract the grab-and-go consumer looking for groceries and other seamless purchase items (like Q-Tips). This half of the store will feature automated checkouts and nearby parking. Depending on the season, consumers can also find necessities like back-to-school supplies or Christmas cards in this section.

“It shows Target is placing their bet on the concept that shoppers wear many different hats,” says Ann Marie Luthro, a retail consultant in Portland, Oregon. “One day I could come in as a mom shopping for clothes, another day I’m on a lunch break looking to grab something and leave quickly.”

A Store Divided Against Itself?

Brands selling at Target may be concerned by the idea of segmenting already limited in-store traffic down the middle.

“Will they lose sales from people who come for food and miss something they’d buy that day on the other side if they had seen it?” wonders Linda Cahan, a store design consultant in West Linn, Oregon.

Stores like Target are designed to encourage impulse buying; the overwhelming amount of options wears down consumers’ capacity for decision-making, so they start “emotionally” shopping. Paco Underhill, environmental psychologist and author of "What Women Want: The Science of Female Shopping," said in an interview that 50% or more of purchases at grocery stores are unplanned. As is, Target is poised for product cross-pollination: a consumer coming in for crackers could find a reason to buy anything from shoes to books and electronics (and vice versa).

“They probably feel it’s worth serving the interests of those quick shoppers,” says Cahan of Target’s recent decision. And it might be. Increasingly, brick and mortar stores compete with online for convenience. 85% of consumers visit stores rather than buy online in order see or try products before purchasing, but this is less true for groceries and other consistent, repeat purchases. How to keep consumers coming in-stores? Match the frictionless experience they’ve come to expect. Target’s new floor plan offers this ease of purchase.

While the consumer response remains to be seen, the new floor plan offers a definite benefit on the business end. Staffing cuts in retail have created a major problem for brands in-stores—but for crucially different reasons depending on the brand category. Target’s new floor plan can better address issues like this.

CPG brands, for example, sell high-volume, low-touch products, which means having product on shelves is the best way to ensure sell-through rate. Fewer store associates means fewer people handling recovery: a top pain point for brands in this category, according to ThirdChannel data. By grouping these items on one side of the store, Target can allocate resources there centered on recovery. Associates in the grocery side of Target can prioritize stocking shelves, while self-checkout technology can be installed to decrease friction at checkout. This will create a better partnership between Target and CPG brand suppliers interested in having their products on shelves rather than in boxes.

The same goes for brands selling products consumers traditionally “shop” for—browsing, trying on, comparing prices. Their consumers have very different needs from the store experience. Footwear is one of these, and brand suppliers that sell footwear will be interested in having knowledgeable associates on the floor who can talk to customers about product features, quality and points of differentiation from competitors. ThirdChannel data shows educated associates can increase weekly sales by at least 60%. Target can also make sure the space is equipped with fitting rooms and other more interactive spaces that enable consumers to try before they buy.

Target plans to roll out 500 more of these stores over the next two years. While it’s one of the only retailers planning such a major overhaul, a recent study from Harvard Business Review suggests it’s a profitable plan. “Where does earnings growth come from when a retailer can no longer drive up the top line by opening new stores?” ask Marshall Fisher, Vishal Gaur and Herb Kleinberger in their report. “The answer is through operational improvements that allow the company to increase its revenues from existing stores faster than its expenses.”

Target’s new store layout has the potential to both optimize retail processes and better meet consumer needs—both of which create value for everyone involved. If the concept proves successful, then retailers everywhere may consider following suit. 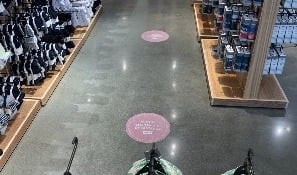